This needs a better caption than any I can come up with!
Any suggestions?

An oddly cute fish (I’ve been grabbed by those huge eyes and chick-like expression!).

It’s copyrighted and I haven’t asked for permission to use it here, so just follow the link to see it.

Wishing you all the best for Christmas (or equivalent) and the New Year!

“From Michael Faraday to David Attenborough plus adorable lemur – many eminent figures have delivered Christmas science lectures at the UK’s Royal Institution. The organisation has put on 180 series of Christmas lectures since 1825, delivered by a total of 105 lecturers including eight Nobel prizewinners. Here, Frank James, the Royal Institution’s science historian, describes his favourite from each decade.”

Watching the Christmas lectures on TV used to be a family tradition in our house and I loved seeing quite complex concepts presented in such a visual way. I didn’t see the David Attenborough one, though, because I was too young and we didn’t actually have a TV at home until the late 70s.

This is a site that I use often, mainly to check the recorded distribution of species I find. It’s very easy to use – just put the species name in the search box and a map of the UK comes up showing distribution. For some data sets it is possible to see records in 100m squares – very useful.

There are some limitations. The most obvious being that the maps are only as good the data provided. For example, I live in Lincolnshire and this appears either to be extremely under-recorded, or records have not been added to the NBN database. Many insects I find quite commonly in my local patch are absent from the NBN maps for this area.

This is a site that is likely to become more and more useful as time goes on and records are added.

The children and I put the tree up and decorated it yesterday evening. It’s pretty small and is up on a table so that Rebel (our greyhound) doesn’t mistake it for indoor plumbing!

It can’t be seen clearly in that shot, but on the top is the angel/fairy made by my daughter when she was in infant school – which has had pride of place on the tree ever since:

We had our first snow of the winter today. Not much, but enough that I couldn’t get to work and had to turn back (having a momentary panic when I thought I was stuck!) and gingerly drive back home.

This really lovely snowflake image is by Don Komarechka. He shot it using a Canon MP-E 65mm macro lens – which might not mean a whole lot to most people, but is probably the lens I lust after most. More of his work can be found by clicking the snowflake or by visiting his blog.

I Spy, With My Little Eye…  A Closer Look At The Eye of a Butterfly 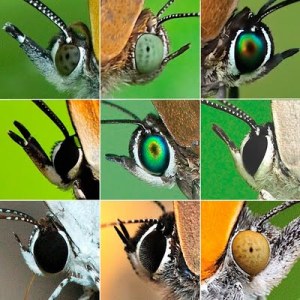 An informative post from the excellent ‘Butterflies of Singapore’ blog. Included are observations and photographs of eyes of butterflies from different families.

Interesting collection of blog posts about ants and their ecology. Appeals to me because I find ants fascinating – as long as they don’t take over my house!

I thumbed this up ages ago, but hadn’t got round to writing anything about it. It’s a site I visit often to find out stuff about these insects – usually when I’ve photographed one and am not sure what it is. Sometimes I still don’t know what it is after looking here, but that’s less to do with the site and more to do with my inexperience – and that many can’t be identified to species level from photographs.